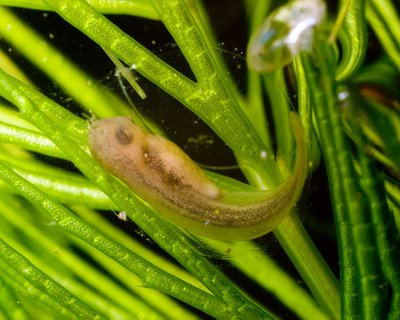 For today, not only do we have another Litoria peronii embryo (left), but a rather smaller beastie.

This afternoon I spotted the little guy on the right attached to some weed in one of my aquaria, so fished it out and put in on a microscope slide to try to get a photo, seeing as embryography seems to be my current obsession.

It's an egg of the Crimson Spotted Rainbowfish, Melanotaenia duboulayi. Close to hatching too. You can see a photo of a newly hatched larva here.

Now we're talking about something of a different scale to the frog embryos here. My estimate for the diameter of the frog eggs at this stage is 4 mm. The rainbowfish egg is about 1mm. To photograph it I used a 28mm lens reversed on bellows with about 13 cm of extension. It's a bit hard to see how the fish is arranged in the capsule, but basically it's got its body and tail coiled around its head. Those eyes even swivel at this stage. 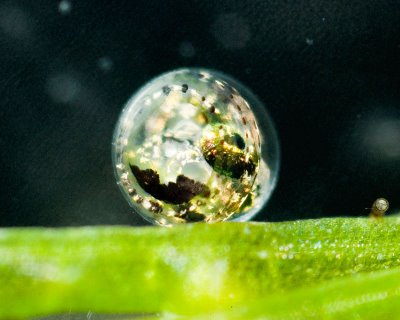 The circus is in town again this time courtesy of Deep Sea News.
Posted by David Nelson at 7:18 pm 1 comment: 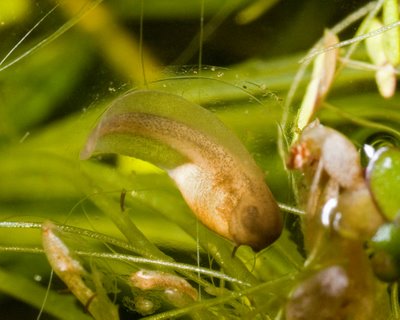 Well here's another little embryo photo, taken today. I'm really getting into this! For the record this is Litoria peronii, the Perons Treefrog. Read earlier post.

Bit tricky getting the capsule to show up, required some experimentation with the lighting and positioning to get it right, but I think it paid off.

If you look closely you can see the external gill filaments - little fingery projections behind where the operculum is forming. You can see the eye developing too. 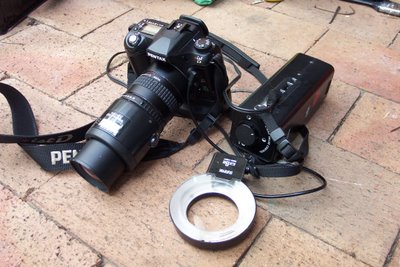 I've had a few requests to describe my photographic set-up, in particular the gear I used for Development in the duckweed.

My camera is a 6 megapixel digital SLR, the Pentax *ist D. It's a few years old now but still does a good job and has served me well. I think that in particular its big bright viewfinder is great for critical focusing, and the ability to use older lenses is a good thing for the student budget. I shoot only RAW these days, it really can't be beaten for the ability to change parameters like exposure, white balance, correct tints etc.

My two macro lenses are the brilliant Pentax FA 50mm f/2.8 macro and the cult classic Kiron 105mm f/2.8 macro. I use the latter for most of my flash work and with animals where the extra working distance is required. The 50mm comes in handy for high magnification stuff such as the frog egg photos where I used extension tubes for about 2:1 reproduction. Both of these lenses go down to 1:1 magnification but are frequently used for non-macro work too.

I try to use available light when possible but it becomes increasingly frustrating with camera shake at high magnification, subject movement, light loss... so I have the Pentax AF360FGZ flash which I use in off-camera conjunction with the onboard flash for things like frog photos. For higher magnification work I have an old battered manual ring flash with a PC sync connection which I just handold either around the lens or slightly to one side (used this for the egg photos). Generally the soft lighting it gives isn't ideal but it's the best thing I have for getting light onto subjects only centimetres from the lens.

I don't use a tripod very often but for the egg photos I did set the camera up and just went and took a photo every now and then after positioning the flash. One frustration was reflection of the flash off the water's surface. I just had to play around with the angle of the camera and flash to avoid it.

My general bit of advice for photographers is to play around with things. Try different combinations, don't be afraid to use older lenses and extension tubes, bellows, reversing rings, close-up filters etc. Even compact cameras without interchangable lenses can deliver stunning and high quality results when paired with close-up filters or similar. Of course this sort of photography involves a lot of trial and error, but critically examine your 'dud' photos to decide what went wrong and try to improve things for next time. Practice on mundane subjects so you know what you're doing when something exciting comes along. And always try to get a photo of the interesting things you see, even if it's a relatively boring 'record' shot. Don't be reluctant to get the camera out of the bag, I know bitterly from experience how much you'll regret it later.

Development in the duckweed 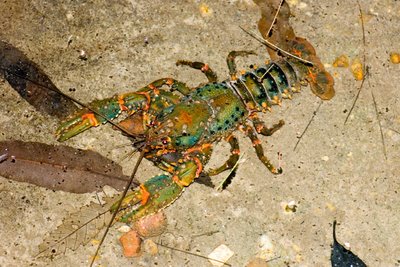 Saw this big monster in a creek last night along with a heap of its smaller brethren.

It's the Sydney Crayfish, Euastacus australasiensis. Wouldn't want to try to pick that guy up, even if I avoided those nasty claws there are still those painful looking spikes to contend with. Truly a well defended beast.

Close inspection pays off as usual, you can see those funny looking oval things on its carapace and claws - zoom in on the photo and what do you see? 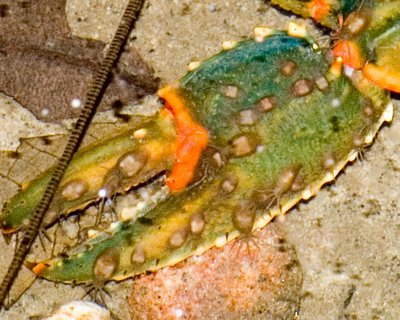 Temnocephalans of course.
Posted by David Nelson at 11:17 am 3 comments: 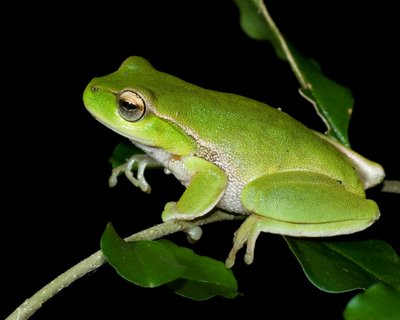 I've considered making a weekly frog theme, with an anuran species or photo 'featured'. But I probably couldn't be bothered to make sure I do it every week. So for (probably) today only, enjoy your frog of the week. (Golly, this is three frog posts and four vertebrate posts in a row!)

This frog is Litoria phyllochroa, the Leaf Green Treefrog. It's a small creek and stream dweller that I'm lucky enough to have quite near in my area. They call in the warmer months from vegetation fringing the water.

The taxonomy of the species and its close relatives are a bit confused at the moment. The problem is frogs in this group occur up the coast from right down south up into southern Queensland. And there have historically been problems with the names and type specimens and all that. There's nudidigitus in there somewhere. Fingers must be naked I suppose. There's pearsoniana floating around too. And don't forget barringtonensis.

Truth is I can't remember which is which (or if its resolved or not) and a quick literature search didn't give me the instant joy I was hoping for. I'll give it a bit more searching and try to get the picture straight.

But I'm pretty sure this one is phyllochroa. The type locality for phyllochroa is Sydney, so that helps.

In the meantime, enjoy your froggy friday.
Posted by David Nelson at 12:19 am No comments: 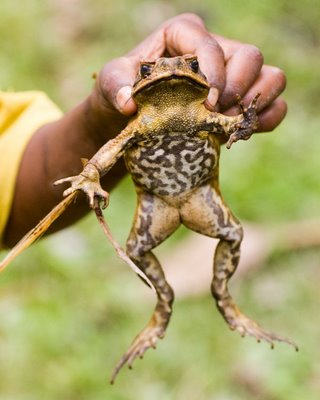 I won't say much at this juncture, other than to say that I see the animal on the right in my future if all goes according to plan...

Want to know more? Never kissed a toad? Never heard of Team Bufo? All shall be revealed in time.
Posted by David Nelson at 6:16 pm 2 comments:

Another from last night 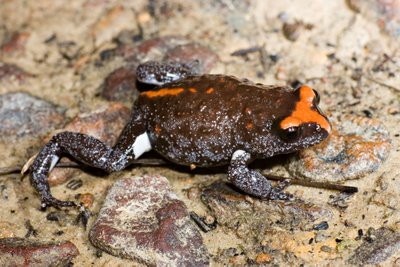 These little frogs (Pseudophryne australis, Red-crowned Toadlets) were calling in small numbers last night. This one wouldn't stay still for a photo shoot, but the upside is that I have some good photos showing how these frogs crawl rather than hop (similar to toads, giving them the 'toadlet' moniker).

Previous post on the species
Posted by David Nelson at 11:24 pm No comments: 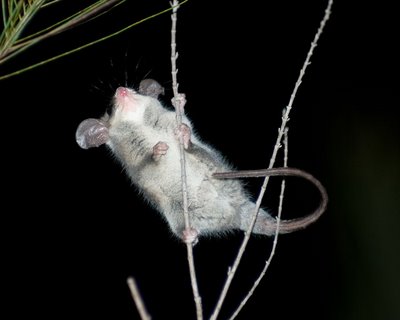 I was very lucky last night while on a wander in the bush to come across one of these critters - it's an Eastern Pygmy Possum, Cercartetus nanus.

It's one of those animals where it's very hard to say how common they are, because even where they are in good numbers you just don't see them.

I spotted its eyeshine off in the heath and thought it was a treefrog, but moving in closer I was able to get a good look.

These little guys eat mainly nectar and pollen, though with some insects too depending on abundance. I liked this comment from here

"C. nanus is able to catch flying insects with one paw" 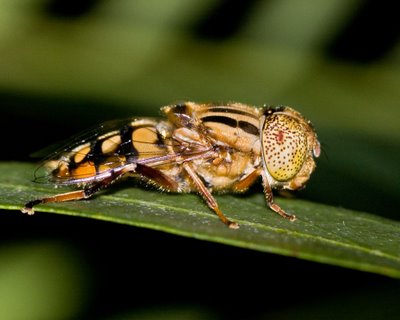 Just a quickie today, bit busy with uni work and all that. Thought I would post an image, so here's something I've always thought was quite pretty. It's a hoverfly/dronefly (family Syrphidae) that I occasionally see in the warmer months though it doesn't generally hang around to be photographed. I found it at night for this photo.

The eyes of this beast impress me greatly. Pretty. Oh, and if anyone could tell me what that thing on its back (to the rear of the thorax, looks transparent?) is I'd be much obliged.

Darn it, I've got all these great blog posts lined up in my mind (for example, the story of the teaser creature) but don't have the time right now to write them. They will come eventally, I promise!
Posted by David Nelson at 7:20 pm 2 comments:

More sponging off a certain other blog 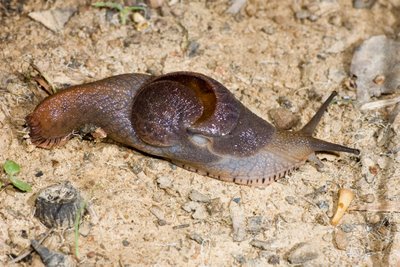 Yet again, A Snail's Eye View has a nice post, this time on Helicarionid 'semi-slugs' and I'm just posting a picture of mine and handing you over to Snail for the info.

This one was spotted in the Myall Lakes region of the NSW mid-north coast.
Posted by David Nelson at 11:09 pm 1 comment: 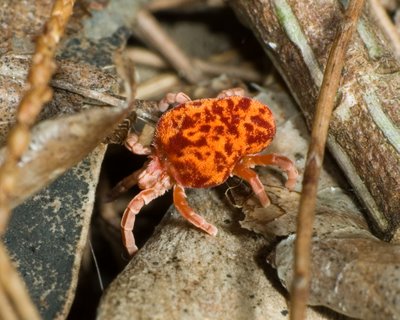 A walk in the bush last night turned up quite a few interesting things and a few good photos too.

On the left is a velvet mite, a teensy little leaf-litter predator. They've got a great soft felty appearance. Generally I see them in scarlet but this one as you can see is mottled orange and red.

The next little critter I happened upon is a type of beetle that I haven't run into before. As you can see it has a bold orange and black colouration, but whats more it lives on and in a bright orange bracket fungus! This raises the question of whether the colouration in this case is aposematic (warning colouration) or camoflague! Or, I wonder, is the beetle sequestering both the pigment and the toxins from its fungus food? 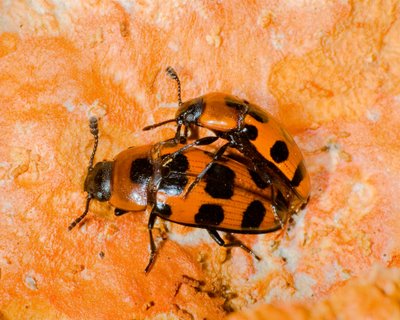 It was surprisingly easy to get a family ID. They're family Erotylidae, having the common name of 'Pleasing Fungus Beetles". Pleasing indeed. 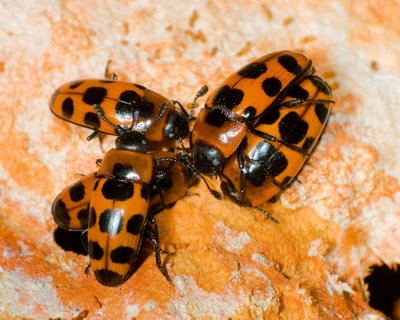 As you can see from the photos, they appear to be quite, erm, social. You can also see the holes in which I presume they live. Oh, and you can also make out their bright orange frass.
Posted by David Nelson at 1:03 pm No comments: 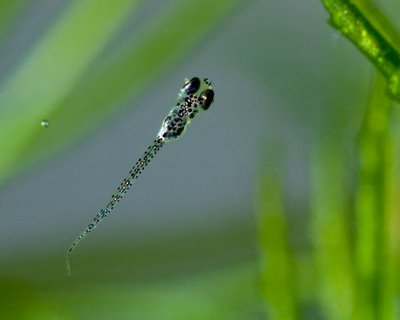 Did this mysterious creature turn up gasping for water after being dragged up from its ocean trench home?

No, it's living happily in my fishtank along with about a dozen of its siblings. It's a days-old Crimson-spotted Rainbowfish (Melanotaenia duboulayi).

These guys are small! Only a matter of millimetres long and less than a millimetre wide. So photography is quite a challenge as you could imagine.
Posted by David Nelson at 5:56 pm No comments:

Day at the circus

For those of you who don't follow Circus of the Spineless, the twelfth circus is up at Sunbeams from Cucumbers. So have a look at some of the interesting inverts from around the world. Including Sydney, Australia funnily enough...

Posted by David Nelson at 10:21 am No comments: