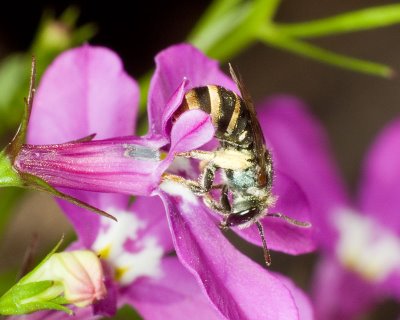 I'm sleepy. Just an image for tonight. It's a small species of native bee that visits my garden frequently, one of the Lipotriches species. I think it's L. excellens, though flavoviridus is another possibility. It's foraging on a Lobelia flower.

I should start searching for groups of males hanging around in the garden.
Posted by David Nelson at 10:29 pm No comments: 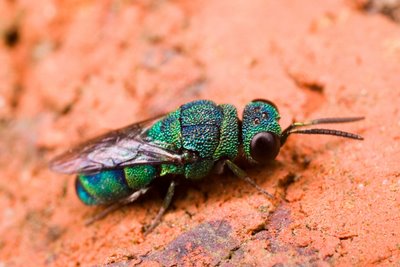 I've been having great fun with my combination of extension tubes (70mm or so) plus my 50mm macro lens racked out to minimum focus. Total reproduction ratio is 2.4:1 on the sensor, meaning that the full frame covers about 10 x 6.5 mm.

Impressive figures, but what I love is that the photos that result give me something of the feeling I get from peering down a dissecting microscope. The minute beauty of nature's tiny creatures is apparent in a way that's well beyond the limits of the unassisted eye.

And so to the subject of this post, the emerald cuckoo wasp (family Chrysididae). I'm sure that most people don't realise how common these are. I'll bet they'd turn a few more heads if they were over five millimetres in length. If you want to see some for yourself, just keep your eyes on a brick wall (corners seem to be preferred) in the sun on a warm day.

What they're after are the nests of other wasps. Things like mud-dauber wasps I'll bet, though I've never actually seen one have any success in its search. Like the cuckoo bees that I've written about in the past, these wasps are kleptoparasites, laying their eggs in the nests of other wasps whereupon the larvae eat the provisions and/or the host's larva.

Have a look at chrysis.net for more information and some great pics of cuckoo wasps from all over the world. There's a great part of the story that I gleamed from that page. After the cuckoo wasp makes a hole in the mud structure of its host, it lays its egg inside, then seals the hole back up! Apparently this is to stop mould getting in and wreaking havoc.

And of course, the metallic iridescence that characterises most of the group is another example of structural colour, rather than pigmental.
Posted by David Nelson at 1:54 pm 4 comments:

More of the blues... 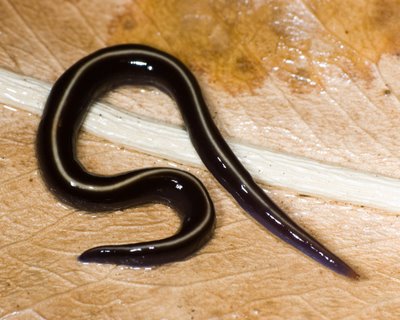 Well that was unbelievably lucky.

I just went out into the garden to attempt to find an animal called Caenoplana coerulea or the Blue Planarian (family Geoplanidae). I rarely see it around, occasionally on wet nights I suppose. One recent observation of it was seeing one preying upon a portugese millipede (Ommatoiulus moreleti).

Anyway, I didn't have high hopes but I was after a couple of photos so thought I'd wander around and try to find one. I sometimes see them under rocks and logs and the odd plant pot.

I lifted a single paver and there one was! Got my photos then went out again and continued searching, but with no luck this time around.

The bottom photo indicates how this creature got its common name and species epithet. The undersurface is a lovely blue colour (coerulea or caerulea means blue). 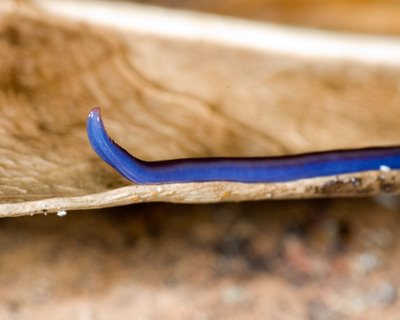 Interestingly there's another similar geoplanid species called Bipalium kewense, the shovel-headed garden worm. Check out the AustMus page for some pics and info. I bring it up because it was originally described in England from Kew gardens (hence kewense), and occurs all over the globe including in Sydney but is now thought to have originated somewhere in Indo-China, and spread from there in pot plant soil and the like.

I bring it up because I've now found out that Caenoplana is a good traveller too! When it was found in California in the fourties, it got described as a new species, Geoplana vaga, before the mistake was discovered. Now Ogren says: "Other localities are known in Tallahassee, Florida (1961); Statesboro, Georgia (1972); San Antonio, Texas (1978) and James Island, Charleston, [South Carolina]". And North Carolina. And Iowa, as of 1999.

I wonder where else it's got to? And what's the secret to the success of this species and Bipalium? 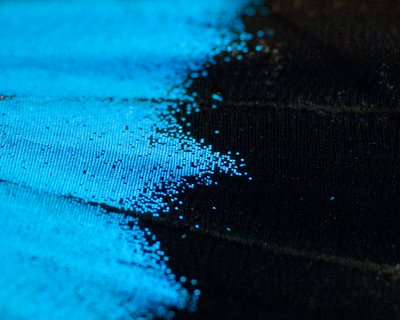 Blue on black,
tears on a river
Push on a shove,
it don't mean much
- 'Blue on Black', Kenny Wayne Shepherd Band

Don't mean much? Take a look at the colours of the Ulysses butterfly (Papilio ulysses) from Australia's tropics and say that again. The amazing contrast between the two regions of this butterfly's wings is actually teaching us some things about optics that we didn't realise.

The butterflies are actually doing two separate things - creating not only the brightest blue, but also the blackest black to make the contrast as strong as possible.

You can just see the tiny scales that coat the surfaces of the wings in the photo on the right. But each of those scales is covered with further structures so minute that they actually do strange things with the light that hits the scale. Take a look at the structure of those matt black scales. 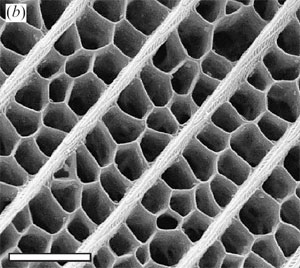 From Vukusic et al. (2004, Figure 2b). This is a scanning electron micrograph of the ridges and latticing on a scale (bar represents 2 μm). While there's black pigment on the surfaces and interspersed throughout the material, this pigment can only absorb so much light. The rest is reflected. But the structure is such that the light actually seems to bounce around in those pits (which are tiny; a thousandth of a millimetre across by my estimate) and get scattered towards the absorbing pigment, some of it getting absorbed each time it encounters the pigment. The end result is an absorbance as high as 95%. This is actually the first time that the use of microstructures to create black colouration has been demonstrated. 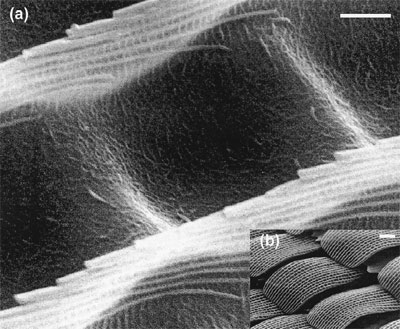 Now take a look at the fine structure of the blue scales (right; from Vukusic et al, 2001; fig. 3; scale bars: a: 1 μm, b: 20 μm). Those ridges are still there though the complex pits within them are not. So it's not really the surface structure that's responsible for the brilliant azure. 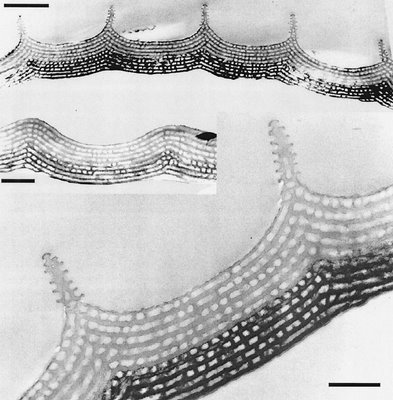 Also from Vukusic et al, (2001, figure 5, scale bars from top: 3 μm, 1 μm and 1 μm), this final figure shows some cross-sections through the scale. The physics is a bit complicated and I don't understand it fully myself, but from what I gather, the 3D matrix of air-filled spaces (often referred to as a 'multilayer nanostructure') within the scale leads to a phenomenon called 'coherent scattering'. So some wavelengths undergo interference and are 'cancelled out' while others are reinforced (i.e. the blue).

So there it is. A great illustration of two completely different types of structural colour and how they are used to produce a conspicuous distinction between a bright colour and its background. Blue on black never looked so amazing. 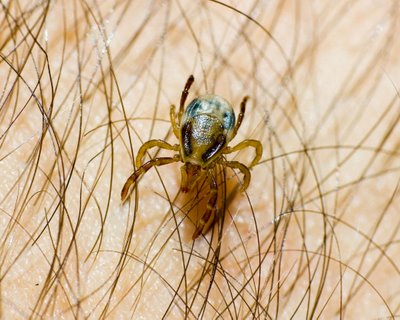 Just a novelty image that I took of a huge tick that I noticed clinging to me while I was out on a walk whilst out in the field.

No doubt it was preparing to have a go at me, luckily I noticed it first.
Posted by David Nelson at 8:33 pm 6 comments: 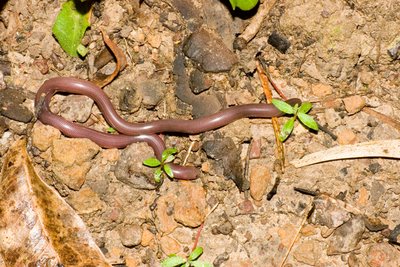 Found a couple of these cool animals on a field trip recently. No, it's not an earthworm, it's actually a young Blackish Blind Snake (Ramphotyphlops nigrescens). I was reminded of the following great story concerning these beasts.

They're a highly specialised snake species - while we occasionally get them at the surface at night, a large proportion of a blind snake's life is spent underground (and hence the reduction of the eyes to small pigment spots). And the diet of these creatures? Ants - specifically they get into the galleries and feast on the larvae and pupae. Obviously ants aren't always the most obliging of creatures and this may explain the smooth surface of the blind snake that offers no purchase for a set of angry ant mandibles.

As it turns out, at least one of the way these guys find their food is by following the scent trails of worker ants! Even trails a week old are still followed. When one encounters an ant trail, it stops, tongue flicks the trail before following it, tongue-flicking as it goes. Eventually it hopefully ends up at the ant nest where it feasts on the developing young.

But the story doesn't end there.

There's a species of snake called the Bandy Bandy (Vermicella annulata) which feeds pretty much exclusively on blind snakes. It's a beautiful creature (though I've not seen one), boldly annulated in black and white. Offer it a scent trail of a blind snake and lo and behold it's transfixed; progressing along the trail while flicking its tongue. Trails of non-prey species are ignored.

So if you ever see a bandy bandy or a blind snake making its way along the ground with a determined look in its eye, think about the way in which both these snakes are specialised to use their olfactory environment to track down their hard-to-find prey. 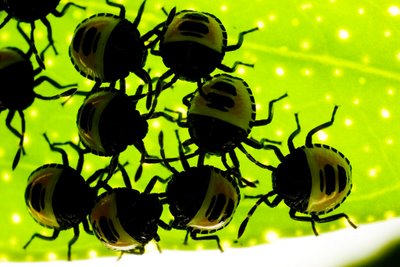 These newly-hatched plant bug nymphs were found aggregating on a lemon leaf in the garden and I decided to try illuminating them through the leaf.

Don't think I really got the composition perfect though I think it's still an interesting enough image.
Posted by David Nelson at 11:20 pm 2 comments: 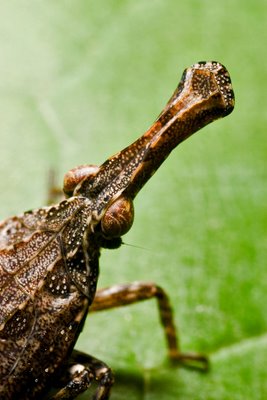 It's a busy time of the year with end of semester projects being wrapped up and assignment due dates looming. Don't even mention exams.

Took a break from research to grab some photos of a planthopper that I noticed in the garden. I believe this is a Dictyopharid planthopper in the superfamily Fulgoroidea. You really expect to find nostrils on the end of that snout, don't you?

Used the 50mm macro with extra extension to get this 'portrait' of a bug that's only about 10mm long.
Posted by David Nelson at 4:50 pm 3 comments: 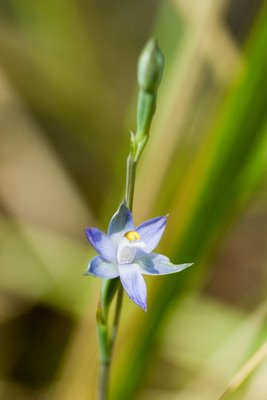 I had a great long weekend in the field - spending some time up on the mid-north coast around Smith's Lake. Lots of interesting animals and even a few plants that I had to admit were very attractive and interesting.

I saw these four species of orchid within a few hours while on a walk first skirting then within some dry sclerophyll forest. The first one to catch my eye was the Sun Orchid (Thelymitra sp.) poking up through some grass. 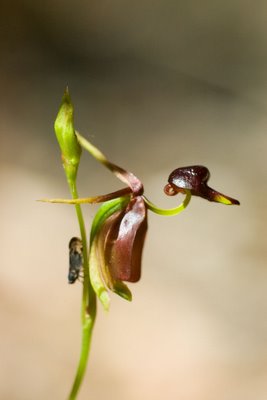 Next a species which always thoroughly amazes me. It's the aptly named Flying Duck Orchid (Caleana sp., possibly C. major). I've seen these guys only once before but was happy to find them again, their flower stalks sprouting out of the disused 4WD track. 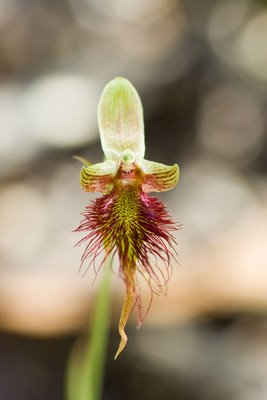 In similar places to the duck orchids were a few Beard Orchids (Calochilus sp.) 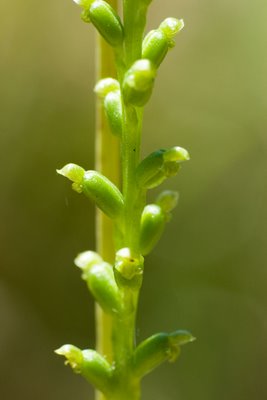 Finally, somewhat inconspicuous in amongst the grass, these tiny onion orchids (Microtis sp.) were in good numbers. Each of those little blooms is tiny, less than a centimetre long!

As I have time I'll slowly put up some more photos and information of other things I saw and photographed - it was quite a rich weekend sightings-wise.
Posted by David Nelson at 10:26 pm 1 comment: