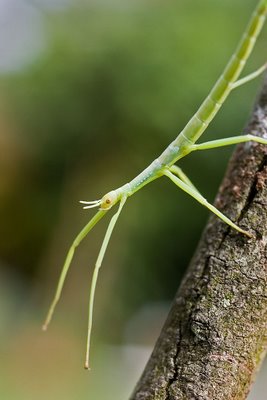 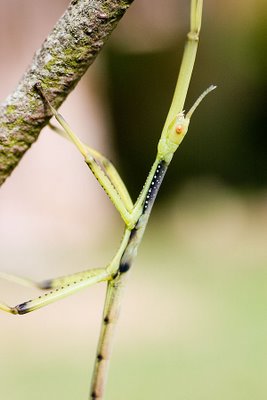 These two phasmids (stick insects) are the same species. In fact they're probably siblings. And surprisingly, they're about three years old.

I keep another species of phasmid, the spiny leaf insect (Extatosoma tiaratum), and I was quite surprised a few weeks ago when I had hatchlings emerging from the container with this species in it that were obviously not Extatosoma. Thinking back, the only source of the eggs of this species that I can think of was from some adults I collected from the snowy mountains in the summer of 2003. I must have just thrown the eggs in with my Extatosoma eggs, and now, three years on, they've decided to hatch. Unfortunately I don't know what species they are - when they become adults I should be able to find out.

The really interesting thing about these nymphs is that they show what's referred to as 'kentromorphic' phase change. If an individual grows up in isolation or low density, it will display a cryptic uniform green colouration. If it's in high density however, it turns the colour of the one on the right above - that is highly contrasting black, yellow and white. That's classic warning colouration.

Locusts show a similar phenomenon. Green when solitary, yellow and black when crowded. The interesting thing is that both locusts and some phasmid species (including the ones showing kentromorphic phases) plague. That is to say the population occasionally skyrockets and you've got a swarm of hungry locusts or phasmids on the move as they deplete local food sources.

So these insects seem to use their colours in quite different ways. When the population density is low, being conspicuous isn't a good idea - predators may not encounter the insects often enough to learn to avoid the aposematic signal, so it's better to remain camoflagued. But when there are heaps of conspecifics around, predators will get the message pretty quickly and there's a real benefit to advertising unpalatability.

http://home.swiftdsl.com.au/~pmiller/stick_insects/papers/key1957/index.html
Posted by David Nelson at 3:02 pm No comments: 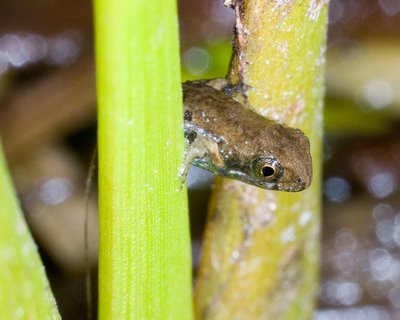 Spotted this tiny fellow hanging on between a couple of blades of grass/sedge by the edge of a large pond a few weeks back. It was in the process of metamorphosing and still had a significant tail.

Too small to really tell what it is at ~1 cm long, though I suspect it's a Common Eastern Froglet (Crinia signifera). Given where it was however, there are a few other species that are possibilities.

At this stage in a frog's life, it generally doesn't eat at all. Its gut is still in the transitional stage between the long spiral-shaped gut it required for its herbivorous diet as a tadpole and the relatively short gut it will need to digest invertebrates. Plus the gape is still widening to give it a big froggy grin, and isn't much use in grabbing prey. So a lot of the energy the metamorph gains is from the resorption of the tail. Numerous other changes are going on; the transition to land involves the switch from using gills to lungs and skin for oxygen absorption, plus the skin needs to toughen up and get ready for retaining moisture.
Posted by David Nelson at 10:50 pm 1 comment: 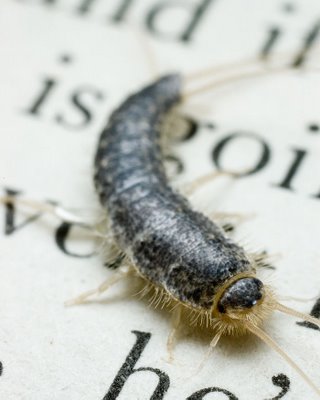 Funnily enough, today in my house I came across two of these insects, called Silverfish (order Thysanura), in separate rooms. They quite often occur in human habitations, though I've never seen them before in mine. Was it just a coincidence that I saw my first and second on the same day, or am I witnessing the overrunning of the whole house?

These insects, together with the similar looking bristletails (Archaeognatha), are generally thought of as 'primitive' insects. Looking at the phylogeny of insects (e.g. here at tolweb.org) it's obvious that the two groups branched off quite early from the rest of the insects. Silverfish and bristletails were originally collectively called the 'Apterygota' (without wings), though this grouping is now considered artificial in the sense that the two orders diverged separately, so do not constitute a clade.

So they're thought to have characters pretty similar to whatever the ancestral insect was. And they seem to survive pretty well by sticking to their guns, dated as they are.

They can eat almost anything, and this keeps them happy places we might think are pretty nutrient poor. Take human houses, libraries, museums; silverfish happily eat book binding glue, paper, photos, fabrics (natural and synthetic)... nothing I'd enjoy munching on.

I sort invertebrate pitfall trap contents brought back from the Simpson Desert, a fairly inhospitable part of the earth. Thysanura turn up regularly in the samples; they obviously don't mind the hot, dry conditions where nutrients aren't a thing to waste.

So I won't be too worried if these things have taken a hold in my house. Hopefully they won't eat through all my books. Moreover, it's fun to see something that looks like it just crawled out of the ocean living happily in our world of processed and synthetic materials. 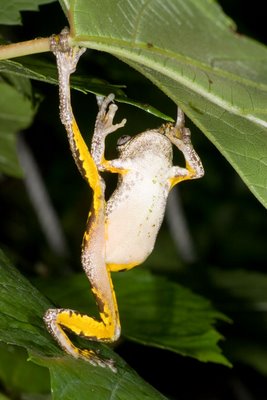 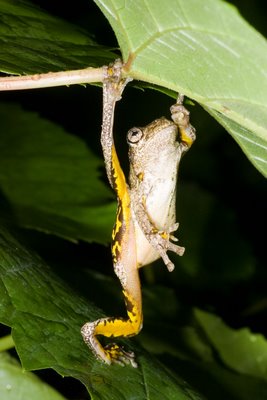 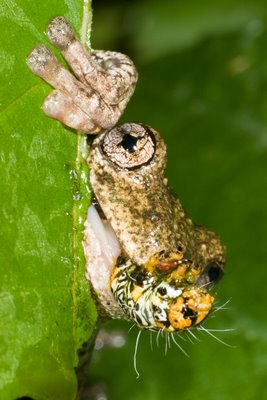 We get a yearly plague of Grapevine moth caterpillars on our ornamental grape. I spotted this Peron's Treefrog (Litoria peronii) just outside our front door just a few minutes ago chowing down on one of the little guys.

Personally I reckon this image should qualify for cute overload, what do you think?

(I have some other images of the frog acting very clumsily but endearingly if you think they'd be better...)
Posted by David Nelson at 11:58 am 2 comments:

Portrait of a dwarf treefrog 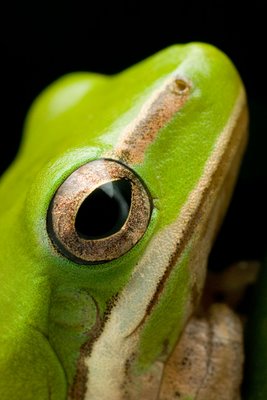 This little guy came in yesterday through the frog rescue service. They're commonly transported around the country in fruit and vegetables.

They're also exceedingly cute little frogs. Their diminutive size of only around 25 mm earns them the common name of 'Dwarf Treefrogs'. There are two species that look almost identical: Litoria fallax and L. bicolor, the former occurring up the east coast to Cairns, the latter from there around the north coast and into WA. I'm not entirely confident about what species this one is, though I can supposedly measure the head width: body length ratio to find out for sure.
Posted by David Nelson at 2:06 pm 1 comment:

A couple of reptile images from that field trip I mentioned that took place a month or so ago. 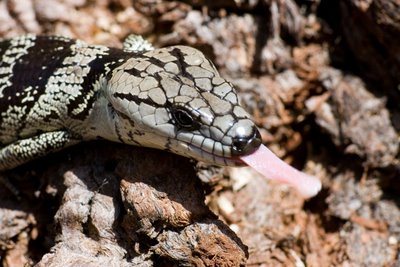 It looks a bit like a blue-tongue only its tongue is pink. So guess what it's called? 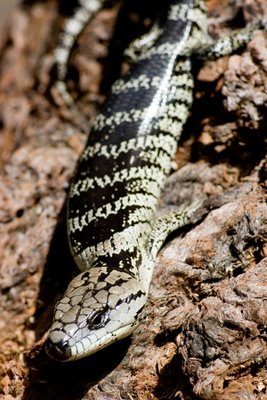 Yup, a pink tongue. Hemisphaeriodon gerrardii to be precise. It's a nocturnal, largely arboreal skink with impressive hooked claws and a flexible tail for climbing. During frogging forays they are occasionally spotted hanging on happily a few metres up a tree trunk.

Here's a short video from the nestbox camera from a couple of nights ago.

The adults hadn't been visiting for a couple of weeks but now they're back and the mum has revealed her couple of cute little secrets to the world.
Posted by David Nelson at 4:11 pm No comments: 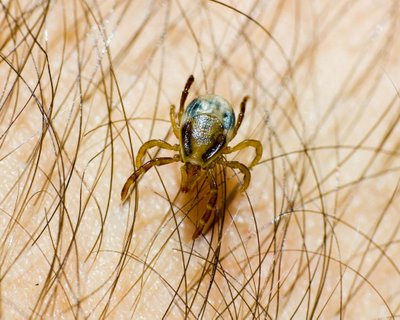 In a previous post I showed a photo that, it turns out, is of an adult female paralysis tick, Ixodes holocyclus.

I realised how little I knew about these guys - everyone's heard of the name and has some sort of fear of getting one, but what's the actual danger?

It tuns out that there's three things that may be problematic. The first is the obvious one - paralysis.

When the tick feeds, it releases a toxin from its salivary glands that spreads from the site of the tick bite. This toxin interferes with the motor neurones and the signals they send to the muscles. So the muscles can't contract - paralysis.

Remove the tick and the problem goes away quite quickly. But it may have left behind some nasty pathogens.

Another possible problem is Lyme disease, caused by a bacterium, though it's not actually confirmed in Australia. Both of these diseases can be treated with antibiotics.

The final thing that ticks may cause is an allergic reaction, and this may be pretty severe, even life-threatening in the case of anaphylaxis.

Circus 14 and a nice link

The Halloween edition of Circus of the Spineless is out over at the neurophilosopher's weblog.

Also I stumbled by chance upon cool page that some of you may be interested in. You may remember a couple of years ago a story hit the news about a new insect order being discovered/described. Confined to Africa, the Mantophasmatodea is a strange group looking like something halfway between a mantid (Mantodea) and a phasmid/stick insect (Phasmatodea). I seem to remember at the time one of the common names being used was 'gladiators' and another is apparently 'heelwalkers' due to the way the feet are positioned.

Anyway I remember that trying to find information at the time was pretty fruitless, so it was good to finally get some info and photos via some museums in South Africa. Check it out
Posted by David Nelson at 7:07 pm 2 comments: 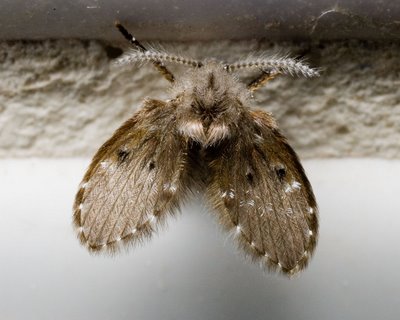 Ever been annoyed in the shower by tiny little flying things?

Ever actually tried to work out what they are, only to be baffled by a combination of their tiny size and confusing features?

Well I have. These things are tiny - the ones in my bathroom (ahem... yep it needs cleaning) have a wingspan of only 2-3 mm. There's a larger species (the one in the photo) that I sometimes see which is about 5 mm. In case you're wondering, I actually nabbed this one from a bathroom and brought it home for some photos, which seems somehow wrong...

And what are they? My first thought was a moth. Scaly-looking wings, hairy etc. But the antennae don't look right. And there's apparently only one set of wings.

Turns out they're a fly (order Diptera). They live in the suborder of flies called Nematocera (thread-like antennae) along with things like mosquitos, the other suborder being the Brachycera (short antennae) which are the more typical houseflies, robberflies etcetera.
And the family of these guys? Psychodidae.

They've got a variety of common names - washroom flies, drain-flies (reflecting their frequent use of bathrooms) and moth-flies.

They apparently like that gunk of fungus and god knows what else that accumulates in shower drains and the like. I wouldn't be surprised if they did well in sewer environments too.

What's more, my species looks awfully like what is identified as Clogmia albipunctata on this page (go there to see some other funky species too). That's in Japan; the species also appears common in America. I wonder where they're originally from?